The bulk of the 2015 operating season is now behind us. Aside from works train requirements, which will be diesel hauled, there is only one steam operating day scheduled for November and then the Santa, Mince Pie and Hangover specials at the end of the year.

The autumn and winter respite from regular steam operations will enable Andy Summers and the Mechanical Engineering team to focus on the maintenance work required to get the operational members of the locomotive fleet ready for the demands of the 2016 season.

Regular steam services will be underway again in March 2016, so there is a relatively brief window of opportunity for the team to get stuck into the essential maintenance programme. This edition of Locomotive Engineering News outlines the winter works the plan for each of our locomotives.

Following a re-tube, fitting of a replacement regulator head and numerous other jobs, W8 was returned to traffic during July. Unfortunately ‘Freshwater’ was failed on the Monday morning of the August Bank Holiday Steam Show with an air leak around the brake cylinder. Investigation revealed corrosion in W8’s ‘undercarriage’, which will now be tackled in the winter works programme.

‘Team Terrier’ is once again back in operation, working under volunteer Steve Smart, and will be taking on ‘Freshwater’s repairs. W8 has had extensive repairs to the rear drag box/footplate areas by previous owners, these areas have been monitored by us during preservation. With the failure in August, it was evident that now is the time to address the condition of this area of the locomotive.

The plan is to strip back all the existing repairs (a bit like an archaeological dig) to reveal the original structure, then assess the condition and sensitively replace life expired components using original techniques, such as hot riveting. This should provide a historic locomotive that once again resembles the original general arrangement drawings.

W8 will also require the scheduled winter examinations of the boiler and an ‘A’ exam to be completed.

‘Team Terrier’ is likely to be in action on most Sundays in the coming months, new members are always welcome to come along and join the team – there is much work to be done! Existing IWSR volunteers should contact Steve Smart or Andy Summers for details of the next ‘Team Terrier’ working days. New volunteers should contact our Volunteer Coordinator for more information on joining the Mechanical Engineering Department. 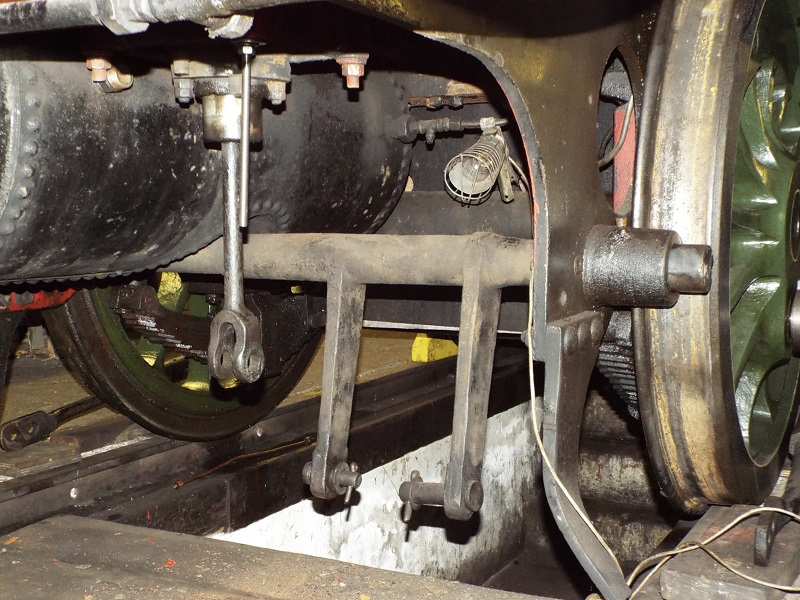 Work in progress to remove the brake cylinder. This picture shows the unique design of the main air reservoir, of riveted construction and specially shaped to fit over the brake shaft. 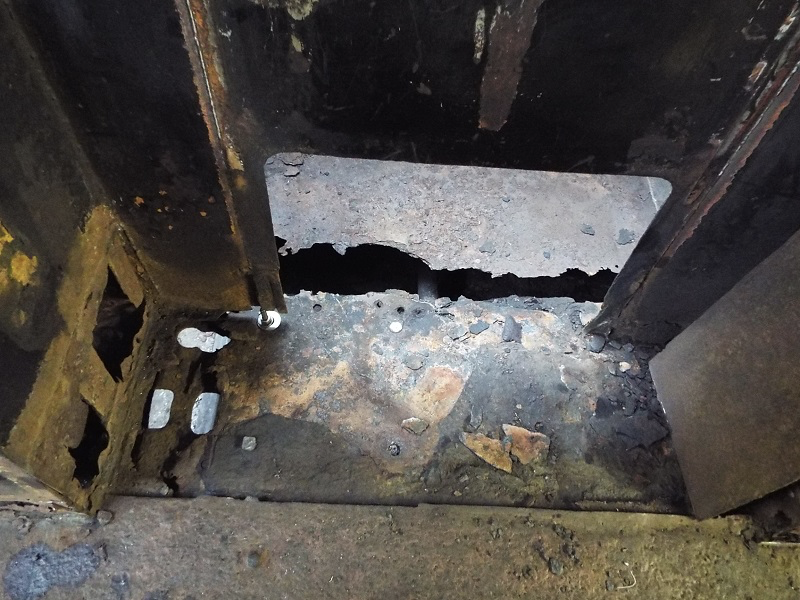 A bad case of corrosion in the bunker/footplate area, this will be tackled in the winter works programme.

There is an outstanding task to identify the cause of leaks from the main cylinder block (joint line between the two castings that make up the cylinder block?). This will require a test steaming in early November. W11 will then be put in undercover storage in Train Story.

‘Newport’ will also require the scheduled winter examinations of the boiler and an ‘A’ exam to be completed. 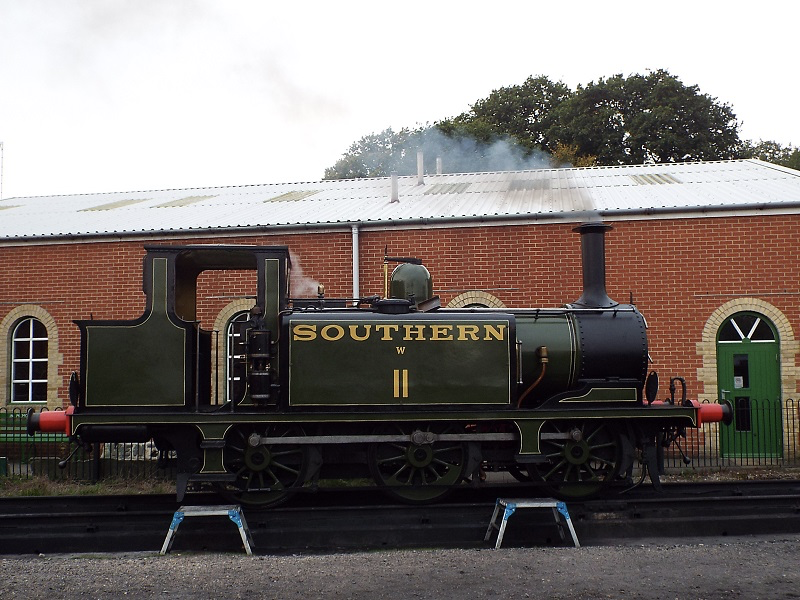 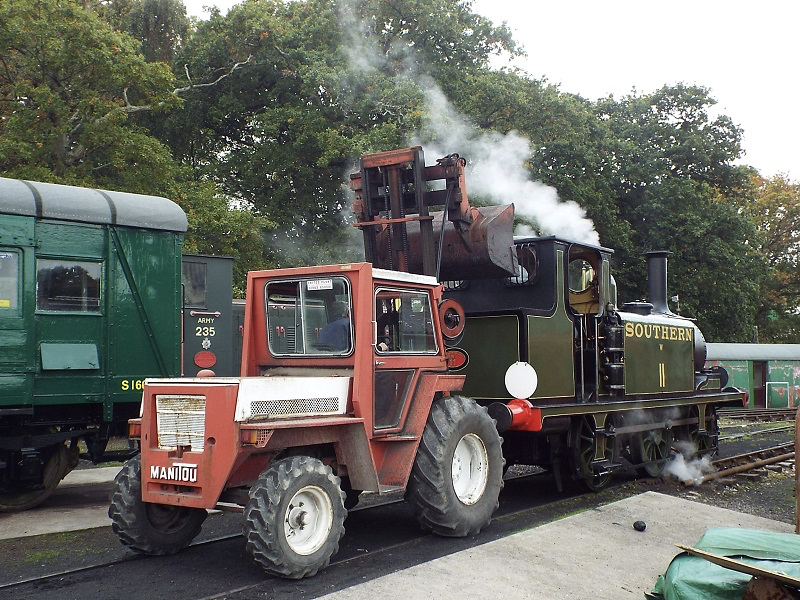 W11 takes on coal before leaving the Goosefield Sidings for the day’s duties on 18th October 2015.

‘Calbourne’ is due to enter the works at the beginning of November for long overdue work, which will initially start with a full repaint in BR Black with a late crest. It is hoped to have this work well progressed before the worst of the winter weather and unsuitable painting conditions arrive. Attention will then be given to the motion and running gear in the form of a ‘heavy mechanical inspection’.

Other work planned is replacement of the wooden cab floor, repairs to sight feed lubricator, scheduled winter examination of the boiler and an ‘A’ exam to be completed. 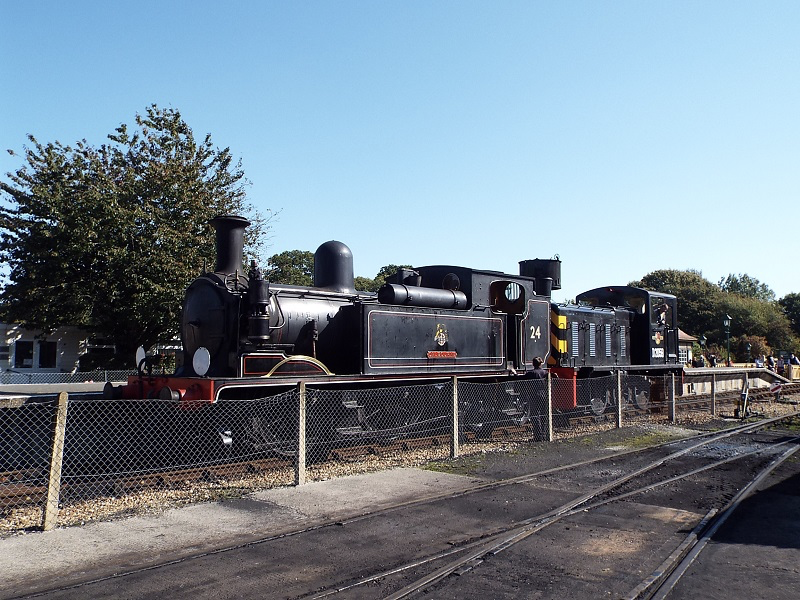 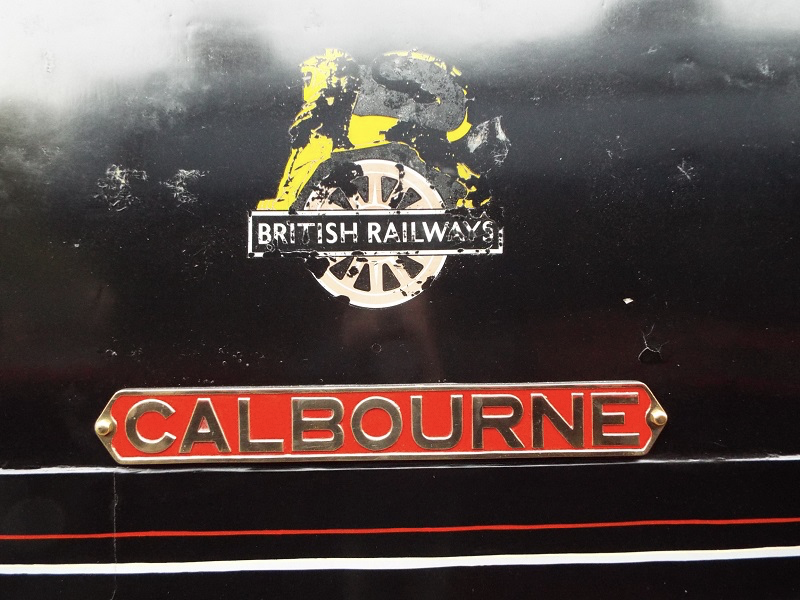 W24’s early BR crest has been looking increasingly weather beaten this year. ‘Calbourne’ will be repainted in later style BR black during the coming winter.

‘Waggoner’ will again be in service for the Christmas trains. After a washout and exams it is planned to be put into storage in Train Story. Waggoner is due a boiler examination (ten year) in 2016.

Work is now steadily progressing on repairs to the boiler; this work is being used to train the apprentice for future boiler work. A replacement smoke box is currently being sourced.

The frames, motion and running gear work will also be progressed and the aim is to have this completed before they are reunited with the boiler. It will then be ‘full steam ahead’ to reassemble the locomotive with many components already overhauled. 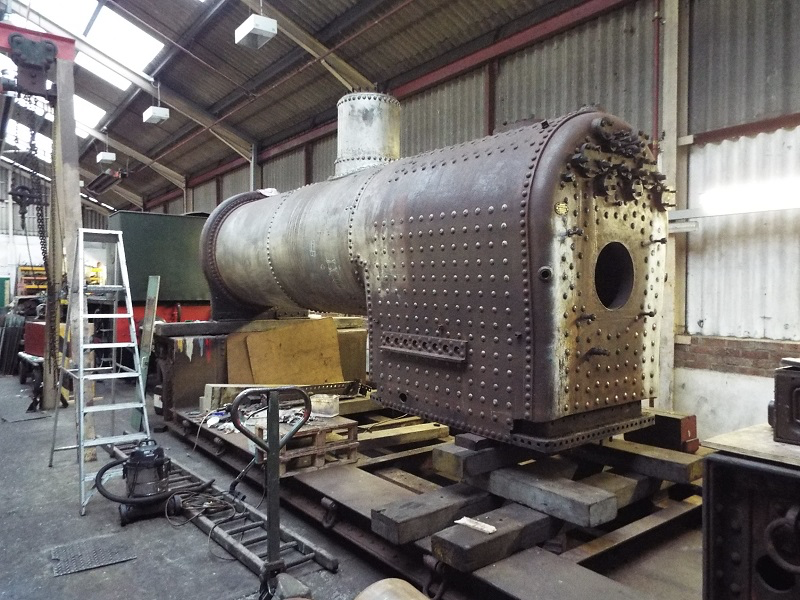 WD198’s boiler in the works. A section at the bottom of the outer firebox, which was subject to severe grooving, has been removed. A specialist welder will be visiting Havenstreet to fit the replacement section. 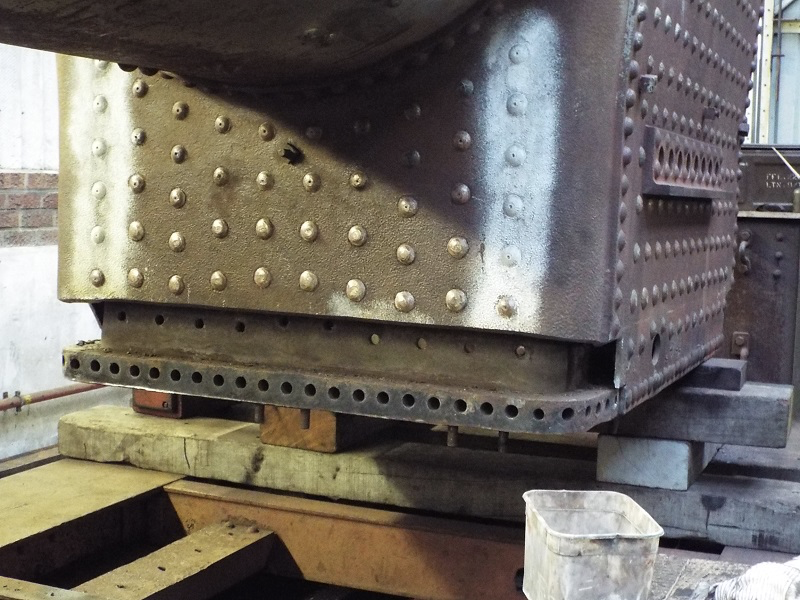 A similar section has been removed from the front of the outer firebox. 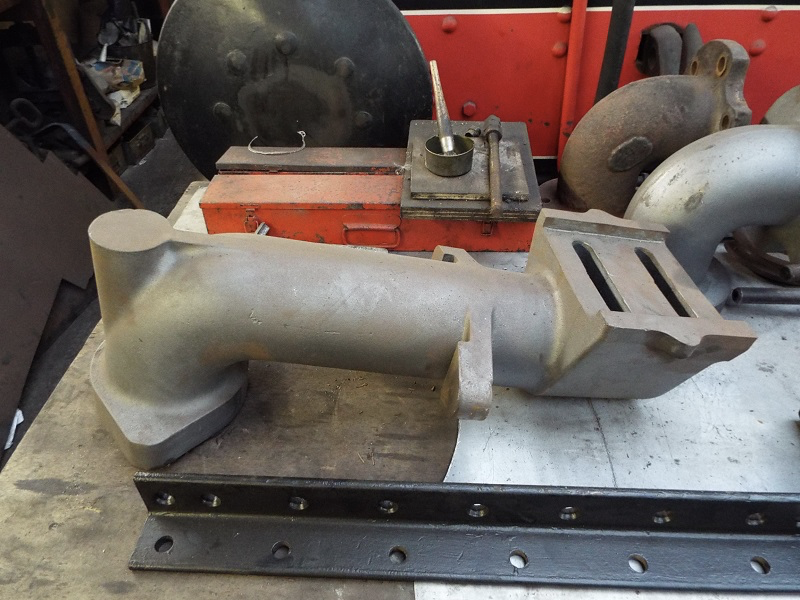 A new regulator ‘J’ pipe for ‘Royal Engineer’, waiting for final machining before fitting into the boiler.

Following further test steamings, including a loaded test with the bogie coach set to confirm the correct operation of the air/steam combination braking system, 41298 was moved into Train Story for display/dry storage on 27th September.

There are still some minor outstanding defects that are currently being progressed, other non-essential finishing items are well on the way to being completed (why do drivers need armrests anyway?).

The boiler will require testing before the start of next season and exams carried out in line with the systems laid down. 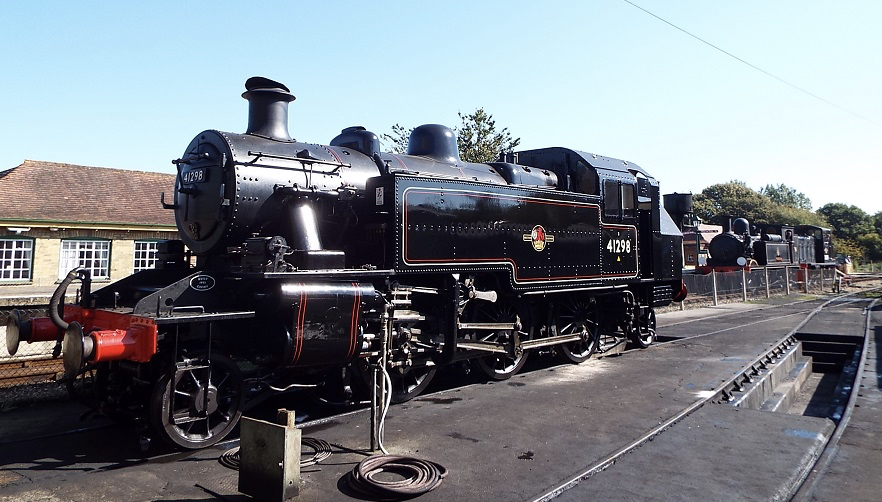 41298 looks immaculate in the morning sunlight at Havenstreet on 27th September, just before being moved around to Train Story for storage until next year. 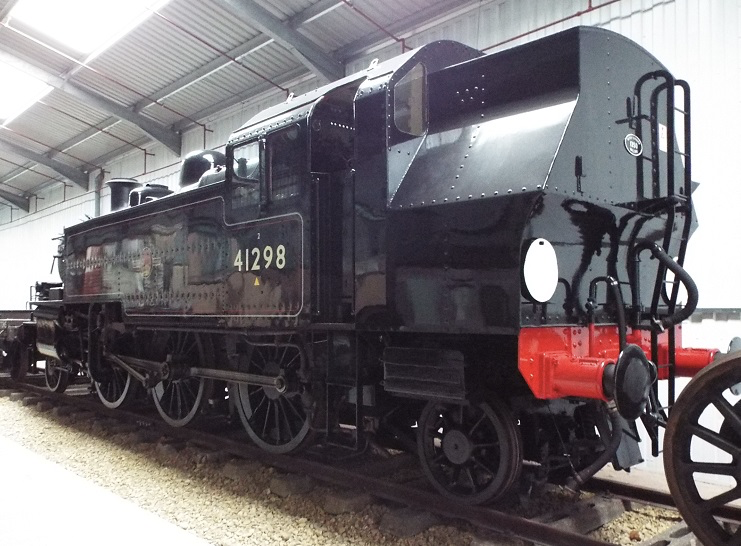 Protected from the weather in Train Store – 18th October 2015.

‘Invincible’ presently waits quietly at the end of the works. Still in the early stages, plans are progressing for a volunteer led project. This hopefully will include volunteer training to pass on the skills required to maintain our locomotives long into the future. Initial work will include properly laying up the boiler whilst also assessing the repairs required for a return to service. 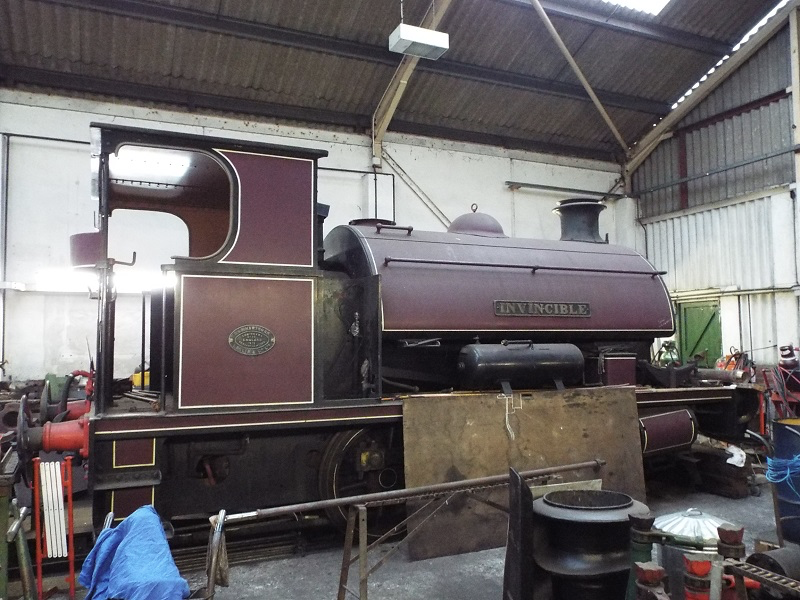 ‘Invincible’ waits her turn for attention at the back of the works.

‘Fred’s overhaul project is being led by volunteer Colin Ward. The plan is to cosmetically restore the locomotive in British Railways green livery, which it carried when she arrived on the Island.

When completed ‘Fred’ will be displayed in Train Story, illustrating a major part of the Islands railway history. The locomotive will also be available for demonstration use. Due to workshop space requirements, ‘Fred’ will be leaving the works at the beginning of November. 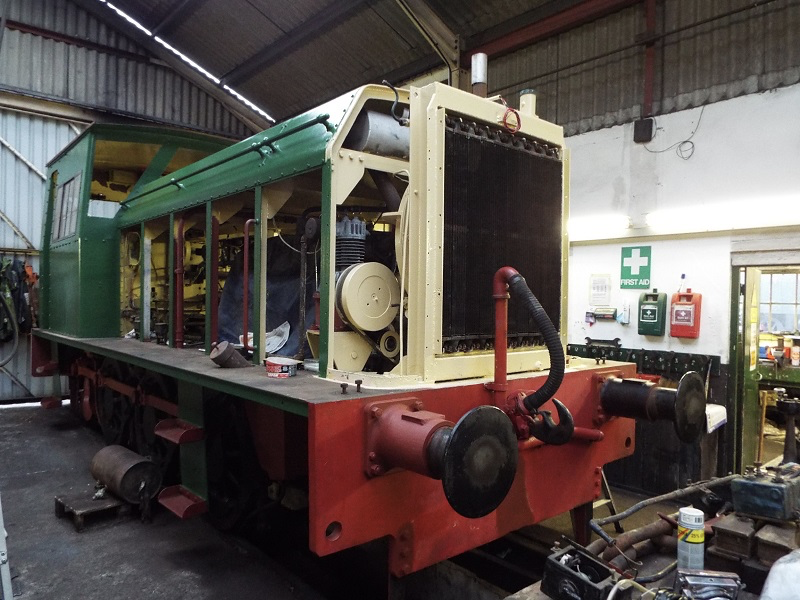 Scheduled servicing will continue on the ‘Shunting’ locos again led by Colin Ward, work will also continue with the ongoing battle to fight off the weather and improve appearances.

There are always some less glamorous but essential jobs to do in the works. One such task is the completion of relocating the loco stores, many items need moving, sorting and storing in an ordered fashion. 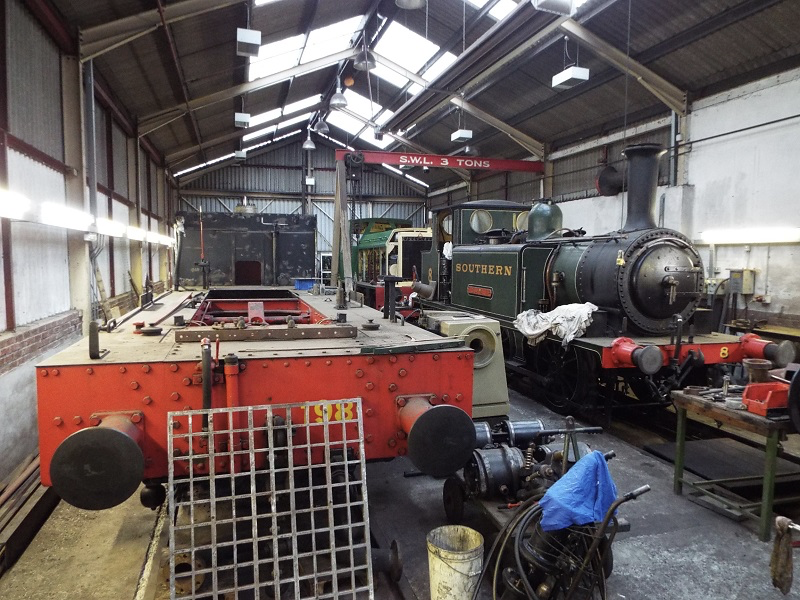 A view of the workshop with every inch of space taken up; WD198 (frames and boiler) on the left, W8 & D2554 on the right with ‘Invincible’ just out of shot.

A BIG ‘THANK YOU’

The hard work that the Mechanical Engineering Team puts into these projects is greatly appreciated – thank you to all who help us, even the smallest contribution makes a difference! To quote one of our Directors on inspecting 41298 ‘The locomotive is a superb machine and a real credit to all who have worked on her’.

New volunteers are always welcome in the Works, we have a vast range of tasks that need completing to keep the fleet ‘in steam’ and no special engineering skills are required. If you want to join us in restoring and maintaining our historic locomotive fleet please contact the railway’s Volunteer Coordinator and arrange to pay us a visit.