What’s in a Name?

What’s in a Name?

Naming locomotives on the Isle of Wight

Right from the dawn of railways locomotives have carried names with famous engines such as Rocket, Puffing Billy or Locomotion springing to mind. The Isle of Wight was no exception. In 1862, the Cowes & Newport Railway bought two locomotives, appropriately named Pioneer and Precurser for the opening of the Island’s first line.

However it was the Isle of Wight Railway, which ran between Ryde and Ventnor, which set the trend of naming their locomotives after the Island’s towns and villages. Their first three engines, built by Beyer Peacock in 1864, were named Ryde, Sandown and Shanklin. These were later followed by Ventnor, Wroxall, Brading and Bonchurch, all places served by the line.

IWR nameplates in our museum gallery

Not to be outdone, Isle of Wight Central Railway named their locomotives Cowes, Osborne, Mill Hill, Whippingham, Newport and Ventnor. Even the independent Freshwater, Yarmouth & Newport Railway got in on the act, naming their engines Medina and Freshwater. Fortunately two locomotives from this era survive at the Isle of Wight Steam Railway in the form of our ‘Terriers’ W8 Freshwater, and W11 Newport.

The Southern Railway, which was formed in 1923, certainly knew the power of marketing and the value of naming locomotives. Recognising the need for extra motive power, the Southern imported additional ‘Terriers‘,  4 E1 class locomotives, and most notably the 23 member of the O2 class that were to become synonymous with the Isle of Wight. Each continued the Island tradition of naming engines after towns and villages, with names stretching from Totland and Freshwater in the west to Seaview and Bembridge in the east.

Our own flagship locomotive W24 Calbourne  survives at the Steam Railway today. Our E1 locomotive never ran in service on the Island and carried the name Burgundy whilst on the mainland. Now preserved at Havenstreet she has assumed the identity of W2 Yarmouth, reflecting the wishes of the late Raymond Harvey whose legacy funded the engine’s purchase and ongoing restoration.

Following nationalisation in 1948 the Island’s unprofitable branch lines were closed and the locomotive fleet reduced accordingly. Eventually just the O2 class remained, each proudly displaying their Island names. By the 1960s, the original brass nameplates had become collectors items and were removed for safe keeping. For a short period in 1966, locomotives on the Island ran with just a number to identify them. This was short-lived as the staff at Ryde St John’s Road works made up temporary steel painted names, enabling the aging O2s to regain their identity for their final season in service. A number of these temporary plates survive in our museum collection, including this example from W14 Fishbourne.

Over the last 50 years the Isle of Wight Steam Railway has built a collection of locomotives needed to haul a busy timetable of trains. As well as those with Island heritage, Invincible, Ajax and Juno retain the names from their industrial backgrounds (an attempt to rename Invincible as Vectis was a short-lived experiment). The names of our Hunslet ‘Austerities’ 198 Royal Engineer and 192 Waggoner reflect their military roots.

Our diesel locomotives all have unofficial names. Class 05 D2554 gained the name Nuclear Fred on account of its voluminous black smoke! Class 03 2059 is known by our team as Edward, and Andrew Barclay 235 is known to many at Havenstreet as Mavis on account of its similar appearance to the character in the Thomas the Tank Engine series of books.

Two of our regular locomotives, our pair of Ivatt 2MTs 41298 and 41313 don’t carry any visible names. Over the years several supporters have suggested that they be given an Island name, continuing a tradition that dates back to the 1860s.

These two engines were originally rescued and preserved by the Ivatt Locomotive Trust. These were later leased to the Isle of Wight Steam Railway on very beneficial terms, and as one would expect there were a number of obligations to which the Railway was happy to agree. One concerned livery “…properly painted in the livery and colours of the former British Railways“. Another clause concerned the names: “Locomotive 41298 is to be named ‘Peter’, locomotive 41313 is to be named ‘Roy’ in memory of the two railway enthusiasts who saved them from the scrapyard. Names of cast brass are to fitted discreetly within the cabs.”

Subsequently the two trustees Roy Miller and Peter Clarke most generously donated their collection of four locomotives to the Isle of Wight Steam Railway without conditions. Nevertheless we consider it only proper that Roy and Peter’s wishes should be respected; hence why they won’t carry an Island name. Roy and Peter’s generosity has been truly outstanding. Long may the locomotives bearing their names keep running.

A name for one weekend only

As part of our 1960s Weekend in September 2021, we’ve imagined what might have happened had the 2MTs been shipped to the Island to replace the aging O2 Class. This isn’t so far fetched – plans to do this had been drawn up but not carried through. Would they have been given names had they come to the Island? Possibly not – by the mid-1960s the marketing flair of the Southern Railway had given way to the harsh economics of the nationalised era. Nevertheless its possible that the staff at Ryde St John’s Road may have tried to continue this Island tradition.

For one weekend only, with the blessing of Roy Miller and Peter Clarke, 41298 will take the identity of W1 Ryde, the name previously carried by the E1 Class locomotive W3 withdrawn in 1959. Ivatt 41313 will temporarily become W5 Cowes, the name carried by W15, a member of the O2 Class withdrawn in 1956. As well as being two prominent Island towns, these two names represent the two ends of the line which now forms the Isle of Wight Steam Railway. 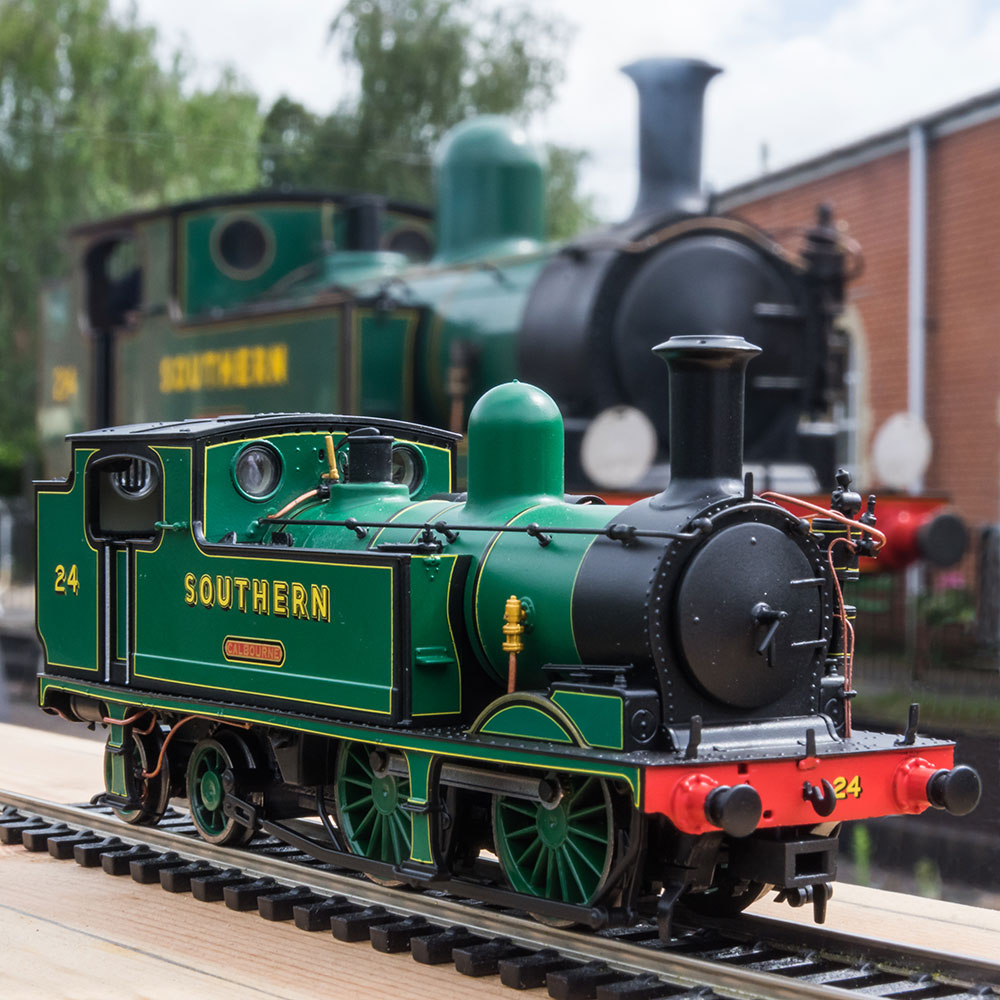