Latest news from the operating department for Summer 2012.

Daily train services operated throughout July, August and until Thursday 20 September inclusive. In fact, the only dates that published services did not run during the three month period under review were Friday 21, Saturday 22 and Friday 28 September. On Saturday 7 July we staged a new event that was born from our 40th Anniversary ’40 hours of trains’ last year. ‘Midnight Train to Smallbrook’ was the marketing headline for an event that saw trains running throughout the evening, culminating in a round-trip to Smallbrook Junction and then Wootton, leaving Havenstreet in the Up direction at midnight. The weather earlier in the day had been appalling, to the extent that the main road into Havenstreet village from the Ryde direction was closed by floodwater for a period during the late afternoon. Consequently, passenger numbers were lower than we would have expected but nevertheless, our visitors, members and operating staff all seemed to enjoy themselves whilst experiencing the very different night-time atmosphere at our Railway. It is acknowledged that the instances of after-dark operation are relatively infrequent at present and that we should ideally undertake more night-time work in order to improve staff competency in this aspect of railway operating.

With a consequential impact on traffic numbers, the unseasonably wet weather resulted in the relocation away from the Railway of the annual Island Motor Show that was to have been staged in our show field over the weekend of 14 and 15 July.

Other than during special events, the one-train ‘blue’ timetable operated on most days in July, with the two-train ‘red’ timetable being used on Wednesdays and also on Tuesday 31 July. One such special event was, of course, the visit by Thomas the Tank Engine for four days from Saturday 21 until Tuesday 24 July. The timetable followed a similar pattern to that of previous years, with passenger services operating between Havenstreet and Smallbrook Junction only and vintage buses connecting Havenstreet and Wootton. With the overall popularity of the event waning and the royalty costs increasing it has been decided that Thomas will not return in the foreseeable future.

Coinciding with the first of our ‘Days Out with Thomas’ was the official opening of our new station building at Smallbrook Junction. Former boss of erstwhile Network SouthEast and now patron of our Railway, Chris Green had agreed to return to the Isle of Wight and perform the honours 21 years to the day since he originally opened the interchange station. To facilitate the event at Smallbrook the service timetable was adjusted slightly. One of the highlights for Chris Green was an afternoon journey between Havenstreet and Wootton in our Permaquip Trolley 68809 (alias Lala) which is currently painted in Network SouthEast colours, a livery very familiar to Chris from the mid 1980s until railway privatisation. 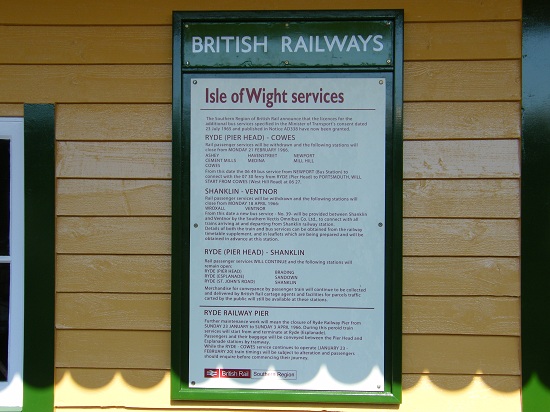 The ex Ryde Pier Head bench is complete with genuine 1960s graffiti etched into the woodwork!

On Tuesday 31 July, a two-train service day, Duty 1 locomotive Ajax suffered a leaking washout plug and was withdrawn from service just prior to the lunch-time service break. Passenger volume such that a one-train service was thought to be sufficient for the afternoon and so after berthing the four-wheeled set Calbourne switched duties and hauled the bogie carriages for the remainder of the day.

The general pattern of services in August saw the two-train ‘red’ timetable being scheduled for Tuesdays, Wednesdays and Thursdays and the ‘blue’ timetable on other days. Regrettably, however, a driver shortage on Thursday 2 August resulted in the cancellation of nearly half our booked departures as only a one-train service could be provided. This was especially unfortunate as visitor numbers were high with a month-long tactical ‘Kids Go Free’ offer having started just the previous day, but the remaining train set was strengthened and no passenger complaints were received.

Misfortune frowned upon us again two weeks later on Tuesday 14 August when Freshwater was also failed with a leaking washout plug. This occurred after the first trip to Wootton had returned to Havenstreet and so D2059 (alias Edward, or his alter-ego Mavis) hauled the four-wheeled carriages for the remainder of the day, including ‘The Tourist’. Swift work by our engineering staff ensured that Freshwater was ready for the commencement of services the following day.

Standing in for the failed W8 'Freshwater', D2059 heads 'The Tourist' through Havenstreet on 14th August 2012.

As usual, the Victorian Weekend at the beginning of August justified a two-train service on both days and it was a pleasure to see our two serviceable Victorian locomotives in action. Calbourne and Freshwater were also both in service during the annual Island Steam Show over the Bank Holiday weekend which saw an extended and intensive two-train service. By way of a change, the traditional ‘Twilight Train’ for staff and exhibitors on the Saturday evening operated to Wootton first before running non-stop through the Down loop at Havenstreet to Smallbrook Junction.

Passenger journey numbers during the four days of the Island Steam Show totalled 7,354 – more than we have achieved for many years. In fact, the number on both the Sunday and Bank Holiday Monday exceeded 2,000 journeys. Despite the busy trains our staff and the trains coped admirably. The failure on the Sunday afternoon of a gate post on the interlocked farm crossing at Havenstreet had the potential to disrupt signalling but a sterling team effort by the civil engineers kept services running and by working well into the evening they effected temporary repairs to ensure that the gates could be safely used and the interlocking restored.

Tea Up! Keeping the station staff supplied with tea is an essential part of the job.

The Sunset Specials did not operate in August this year. These evenings proved popular with volunteers and it was disappointing that these twice weekly services were withdrawn.

With the arrival of September we maintained the operation of daily services until Thursday 20 inclusive. For the first two weeks of the month we had published a two-train service on Tuesday and Wednesdays. Unfortunately, another leaking washout plug problem meant that Freshwater was declared unavailable for traffic as Duty 2 locomotive before the commencement of services on Tuesday 11 September. D2059 deputised until the lunchtime service break when the four-wheeled set was berthed for the remainder of the day and we reverted to the ‘blue’ timetable. With W8 still unavailable on the following day the Class 03 Diesel was called upon again. However, D2059 herself suffered a mechanical problem with an oil leak which caused the cancellation of the 11:15 service to Smallbrook Junction whilst repairs were hastily undertaken by the duty fitter. The 03 resumed service at 11:53 but, once again, the four-wheeled set was berthed after the lunch time service break as we reverted to a one-train service.

Duty Operating Officer Clive Miller during his routine liaison vist to Duty Fitter Mike Brittan before the start of services on 27th July 2012.

The 60th anniversary of the closure of the railway between Merstone and Ventnor West was marked during the weekend of 15 & 16 September. On the Saturday and in glorious late summer sunshine some 69 people (and a dog) gathered at the site of Merstone station for a guided walk to Ventnor. On the Sunday at Havenstreet the anniversary was marked with a special two train service which, during the afternoon, included two round trips operated solely by Freshwater coupled to the Ventnor West Push-Pull Set No. 484 (LCDR Brake Third 4112 and LCDR Saloon Composite 6369). The working timetable allowed plenty of time for several photographic run-pasts at Ashey, something that was greatly appreciated and enjoyed by those who travelled on the train and also by those taking photographs from the lineside.

From Monday 17 September we reverted to the basic ‘green’ timetable for the remaining operating days in the month. On Friday 21 September, after 117 consecutive days of published services, the operating railway fell silent. However, after a two day break and with the exception of Friday 28, daily services resumed until the end of September.

The monthly traffic figures for Quarter 3/2012 are shown in the following table:

One of the challenges faced by the Operating Department relates to the training and passing out of shunters and guards. Quite simply, there are not many opportunities for trainees to gain practical experience of shunting, especially at convenient times when they are available. However, on Sunday 29 July, we staged a training session during which trainee shunter/guards Ian Pidgley and Stuart Angus were able to familiarise themselves with practicalities of shunting both goods and passenger stock using our Class 03, D2059 as motive power. Although staged primarily for training purposes, these sessions also provide a welcome distraction for our visitors whilst they are waiting for the arrival of the next passenger train.

It is a pleasure to record that three members have recently passed out as signalmen. Jim Roberts is well known to regulars at Havenstreet. A long-serving volunteer guard, Jim is now on the permanent staff as the Railway’s Health & Safety Officer.

Now living in Bridport, Dorset, David Delaney makes use of the volunteer hostel when he visits Havenstreet for three or four days at a time. David has previously been a volunteer signalman at both the Mid Hants and Swanage Railways.

Jake Vivash joined the Railway four years ago as an enthusiastic 14-year-old. Jake has worked hard to channel his youthful exuberance and by focusing his efforts he passed out as a signalman within three months of celebrating his 18th birthday.

‘THOMAS’ AND THE REALLY HOT DAY

During what was likely to be his last Isle of Wight holiday for some time, ‘Thomas’ was lucky enough to be able to enjoy some of this summer’s rare hot days. These pictures show ‘Thomas’ and the Operating Team at Havenstreet on Tuesday 24th July, the last day of the event.