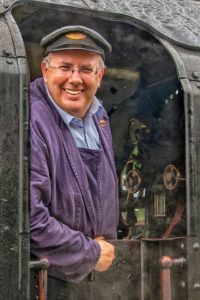 “It’s not all glamour”, is the cry of the Fireman when tourists see them merrily waving from the footplate. To give you an idea of the duties and jobs involved in just a single firing turn, volunteer Roger Millward takes us on a candid behind the scenes candid look of what goes on….

Well it all starts at 0730 (although I normally arrive early) with signing on to confirm attendance and that you’re fit for duty, to read the notices and to review the locomotive log sheet to make sure there aren’t any outstanding defects……next a cup of tea.

As soon as possible work starts on the loco with the safety checks. These include boiler water level, firebox leaks, smokebox leaks, along with other checks. If all is well the Fireman signs to confirm that the loco is fit to light up. If something is not right then the Duty Fitter is called to assess and fix if necessary, until they confirm no more can be done to the loco. The hose is then put in the tank and turned on of course! Finally a “DO NOT MOVE” sign is put on to a lamp bracket to protect the crew and cleaners. 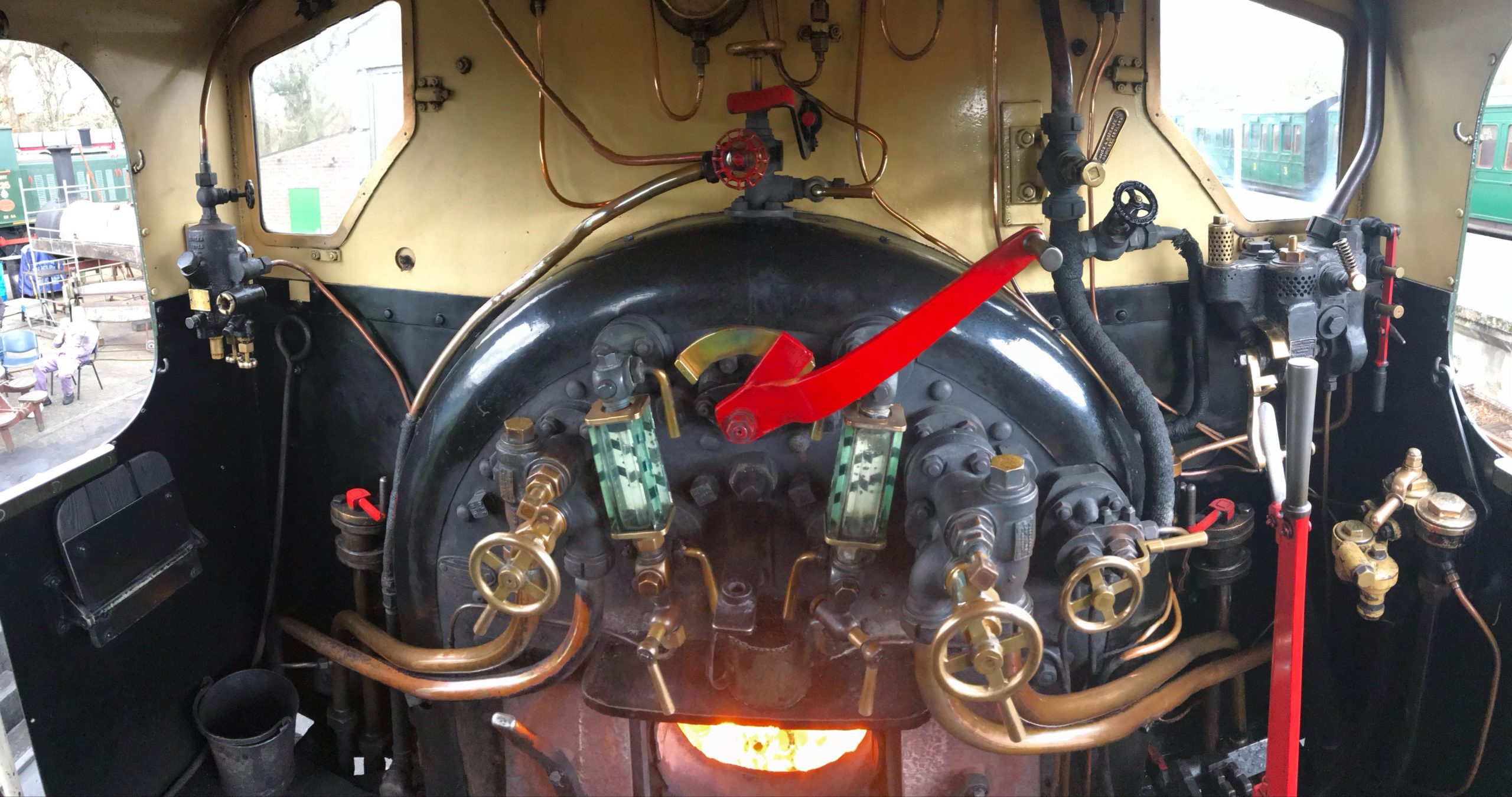 The next job is to remove the old fire from the previous service. Depending on what you find either means at best you use the “long spoon” to shovel the old fire out of the firebox in to a waiting wheelbarrow…..at worst if there’s a lot of old fire which may have “clinker” stuck to the fire bars it’s a back breaking job of breaking it up with a fire iron and shoveling it out and can take 20 minutes or so. It is vital to start with a clean firebox as failure to do so will come back and haunt you later in the day when the fire can’t breathe.

Now it’s clean I can start building the fire. There are numerous ways of preparing and lighting a fire but I still do it the way I was trained 9 years ago. Firstly a ring of coal is shoveled in to the fire box (normally around 16 shovelfuls), next a layer of scrunched up newspaper, then a goodly amount of dry wood followed by another layer of newspaper. If the wood’s a bit damp some old oily rags can be added to give it a chance of catching. The fire is then lit and the doors shut. It’s a reassuring sound when you can hear the wood crackling as you know the fire is alight.

Whilst waiting for the fire to really get going I then grab the Brasso and start polishing the brass work. This goes on for some time in between checking on the fire and adding coal as and when needed to gradually raise steam. If the Duty Fitter ever asks you if you’ve finished cleaning NEVER say yes as if you do he’ll be climbing in to the cab and check and he will find something to do! The best response is “still working on it”. It has been known to cook bacon on the shovel and make “butties” for crew and cleaners.

One of the most unglamorous jobs is raking out the ashpan. The ashpan sits underneath the firebox and collects the ash and remnants of the fire as they drop through the fire bars. This prevents hot ash being dropped straight on to the track whilst in motion. So to prevent the ashpan from over flowing it needs to be cleaned. The Fireman takes the long handled rake and hose, tells the Driver that he’s going underneath and makes his way in to the pit.  The ash is very dusty and requires a lot of water to ensure that when you start raking the ash it doesn’t fly everywhere. Once the ashpan is empty, a quick wash round with the hose and then back to the fire.

All being well, pressure is raised, tanks are full (and the hose removed before is overflows) and the loco is clean and ready to be off shed around 09:50.

Roger carefully builds the fire. One shovel to the back right…

The Duty……..now the enjoyment starts

When we come off shed and start to run light engine to couple up with the carriages it’s great to see the waiting visitors, especially the children as they wave probably to the engine rather than the crew but we wave back.

Once the Driver has buffered up to the stock the Fireman tells the Driver that he’s “going in between” and only when the Driver gives the signal does the Fireman climb down and steps in between the engine and carriages, probably one of the most dangerous places for him to be.  But we have our safety procedures in place and he hooks up the couple and attaches the air hoses for the brakes and in the colder months the steam heat pipes which take steam from the engine and passes it through all the carriages to warm up the passengers.

The job of the Fireman then relates to keeping the fire, boiler water level and pressure just right prior to departure. There’s also time to chat to passengers about all sorts;  from where does the Coal come from? what’s that thumping noise coming from the front of the engine? do you cook breakfast on the shovel? and many more besides. Personally, I love this part.

Prior to departure the Driver is handed the token. This is a safety feature invented by the Victorians to ensure that only one train can enter a section of single track as the signalman cannot alter any points or signals for that section until it has been returned to him.

Soon its time for the Guard to whistle-up and wave his green flag for departure, the Fireman gives the Driver “right away” and if the Driver is happy that we have the token, the signal is ‘off’ and we have water in the boiler, we acknowledge with a ‘toot’ and off we go.

On the road I put a ‘round’ of coal on the fire which is normally nine shovels;  3 up the front, 3 across the middle and 3 at the back. But this could vary depending lots of circumstances, and that’s where the experience comes in.  The engine soon ‘tells’ me if she’s happy or not! I’m often asked whether or not it’s a tough day on the shovel and my usual reply is “depends if I get it wrong or not”. An engine can fight you all day long if you don’t treat it with respect and not sort out issues with pressure, water or state of the fire quickly.

If the engine is singing well then there are opportunities to watch the scenery go by and keep an eye out for signals and any potential issues ahead.

At each end of the line, the Fireman uncouples the engine, we then ‘run round’ light engine to the other end of the train, couple back up and the routine starts again.

At Havenstreet we always take on water from the tower to top up the tanks as one thing we don’t want to run out of is water…. imagine boiling a kettle without any water inside!

We come on shed for lunch, which essentially means uncoupling and moving the engine to the shed sidings where it can be serviced and we can have lunch. I always treat the Driver to a sausage roll or a pasty warmed up above the firebox.

If I’m lucky there are normally young volunteers waiting to kindly ‘look after’ my fire by topping up coal where necessary and also the water. Hopefully keeping the engine ‘quiet’ which means not letting the pressure climb above the safety limit and blowing plumes of steam through the safety valves which is very noisy.

The afternoon carries on in much the same way as the morning with on occasions the addition of a young volunteer keen on learning how to fire and I’m more than happy to let them have practical experience of all the aspects and indeed I enjoy teaching them and hopefully they enjoy being taught by me!

Filling the tanks at the water tower
Fireman, Roger Millward

The Last Train and Disposal

Depending on the timetable for the day a turn can end anywhere from 4pm to 6:30pm. When we’re returning to Havenstreet for the last time, the Fireman is already planning ahead to make disposal is as easy as possible. This is done by making sure that the fire is not too large, that the boiler water level is ¾ full or more and that the footplate is cleared of loose coal and tidy for the next day.

When we finally detach from the train, we make our way back to the shed sidings for disposal. Disposal for the Fireman involves filling the boiler full of water, running the fire irons through the fire to deaden or ‘kill’ the fire and break up any clinker from the fire bars. Clinker is the remnants of the coal and sets like concrete on the fire bars starving it of air.  The smokebox at the front of the engine is opened and ash is shovelled out into a waiting wheelbarrow.

When that’s all done, final checks are made, Footplate tidied and the lid put on the chimney. Disposal, washing, getting changed and signing off adds up to around 30 minutes to the end of the turn.

Being a Fireman is a tough physical job but it’s so satisfying and enjoying to do. I’m very proud to be a Fireman…… hopefully one day I’ll qualify as a Driver.

Please visit the volunteering section of our website if you’re inspired to volunteer at the railway.