The working timetable for the heritage goods trains had been changed for this year to include just one brake van, with the intention of making the train more authentic and providing interest for our visitors while the wagons were shunted. However, events conspired against us and we reverted to including the SR 15T Goods Brake Van 55724 at the country-end of the train. Although less authentic, having two brake vans removes the need to shunt the train and thus improves time-keeping. 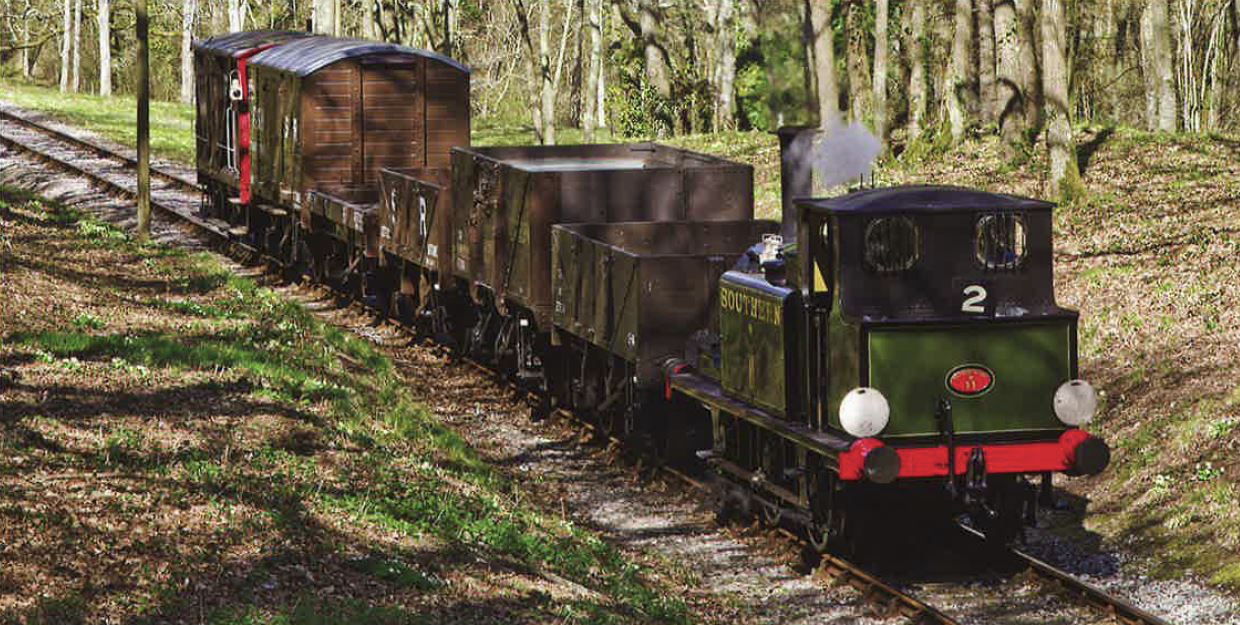 W11 was seen on 12 April with the heritage goods train, on this particular occasion with only one brake van. (Image John Faulkner)

On Thursday 16 April, the bogie set was withdrawn from service at the end of the day, with LBSCR Third 2416 having a set of weakened bolster springs. This was causing the coach to lean slightly to one side. As a result, the four-wheeled carriages were in traffic on Sunday 19 and Tuesday 21 April but the bogie set was shunted back ready for Wednesday 22. The evening of 22 April also saw us staging a major, multi-agency incident exercise, led by IW Fire & Rescue.

Following the full line tamp back in February, ballast trains have continued to operate from time to time and one such day was Monday 20 April. This particular day also provided a good practical opportunity for trainee guards Peter Blake and Geoff Hammersley-Norton to familiarise themselves with the requirements of being a ballast guard. In fact, Peter Blake qualified as a passenger and goods guard later the same week, on Thursday 23 April.

We hosted another UK Railtours charter on Saturday 25 April when a two-train service was in operation. W24 Calbourne was in charge of the four LBSCR bogie carriages whilst A1/x Class W11 hauled the four-wheeled carriages. The guards’ journals recorded a total of 418 passenger journeys. Once again, the passengers had travelled from London Waterloo to Portsmouth and then across the Solent to Ryde Pier Head and onward to Smallbrook Junction.

The Real Ale Festival was staged over the bank holiday weekend at the beginning of May. A two-train, extended ‘red’ timetable ran on both Saturday and Sunday, with the final departure to Smallbrook Junction leaving Havenstreet at 18.55. A one-train, ‘blue’ timetable was operated on the Monday, traditionally the quietest day of the Real Ale event.

Another photographic charter took place on Friday 8 and Saturday 9 May. W24 Calbourne was in steam and, at times, masqueraded as her long-departed classmate, W33 Bembridge. A replica nameplate was carried on just one side tank. Most of the photographs taken by the 35 or so participants were of the train in the Smallbrook section, with the length between Deacons Lane bridge and Ashey Grounds appearing to be the most popular.

On Sunday 10 May, we staged the second of our monthly Island Steam Days. In the light of experience gained from the April event it was decided to include a brake van at each end of the train. Although not ideal, it does remove the need to shunt the brake van and therefore reduces the likelihood of the passenger service being impacted by late running. The goods train was, once again, hauled by W11. On the same day, we operated a late-afternoon service in connection with the staging by the Origins Theatre Company of Charles Dickens’ ghost story The Signalman. One round trip was offered, leaving Havenstreet for Smallbrook at 17.00. Our woodland stage was the venue for the production.

The AGM took place on Saturday 16 May and, as usual, a special timetable was in place solely for the benefit of members. A1/x Class W11 was in charge of the four-wheeled carriages for the day. The following day was our Festival of Transport. This has become a popular event and the two-train service saw both W24 Calbourne and W11 in service.

Towards the end of the day on the Saturday of the spring bank holiday weekend, the hand brake column casting failed on A1/x Class No 11, necessitating the withdrawal of the locomotive for the remainder of the weekend. With Hunslet ‘Austerity’ 192 Waggoner still cooling down in readiness for a boiler washout, BR Class 03 D2059 was pressed into service to operate alongside W24 Calbourne. On both the Sunday and bank holiday Monday, D2059 hauled three LBSCR bogie carriages whilst Calbourne was at the head of the six four-wheeled carriages. By Tuesday 26 May, Waggoner’s boiler washout had been completed and she returned to the two-train roster.

Saturday 6 June was the day when Train Story was officially opened and also when ownership of LBSCR 10T Passenger Luggage Van, ex-Cattle Wagon 46924 passed from the National Railway Museum to the Isle of Wight Steam Railway. Over 100 invited guests attended the event on a glorious, sunny day. W24 Calbourne was in steam and although the working timetable called for just one round trip (using the four-wheeled carriages) she played a key role in the opening ceremony inside Train Story and was also required for a considerable amount of shunting both prior to the event and later in the afternoon, after our guests had departed.

The third in this year’s series of Island Steam Days was held on 14 June. Despite the timekeeping problems encountered back in April it was decided to try again to include just the one brake van in the consist which was, again, hauled by W11. Time-keeping was passable and just one passenger service suffered a minor delay which was quickly recovered. Reasonable time was maintained as the result of two factors. Firstly, driver Martyn Budd, with his fireman Ian Wilcox, helped to keep things moving at a fair pace, with booked section times being achieved and Martyn’s engineman skills were also instrumental in keeping down the run-round and shunt times. Secondly, the guard had with him an assistant, so whilst one person undertook the shunting the other worked the ground frame.

It won’t always be possible to run the heritage goods train with just one van but, when possible, the shunting at Havenstreet attracts plenty of interest from our visitors. Furthermore, our lineside photographers certainly appreciate the more authentic appearance of a goods train with just the one brake van.

On Friday 19 June we hosted a wedding charter. One round-trip of the entire line via Wootton and Smallbrook Junction was operated with W24 Calbourne hauling four four-wheeled carriages. Saturday 20 June was our annual Midsummer Night’s Steam and carvery. The drizzly afternoon weather was replaced by early-evening sunshine and another successful evening was staged. Almost all the dining covers had been sold in advance and 239 passenger journeys were recorded on the guards’ journal for the five round-trips, the first of which left Havenstreet at 17.40 and the last at 22.20. Further evening carvery and train services are planned for Saturdays 5 September and 19 December.

Thursday 25 June proved to be a challenging day. At 10.06 I was informed by duty signalman Nick Boycott that he was unable to engage the facing point lock on the Down Loop points at the country-end of Havenstreet station. Armed with red and green flags and a point clip and plug, I trudged along to the errant set of points where, sure enough, I could see that the point blade was not fitting snugly against the stock rail, thus correctly preventing the facing point lock from engaging. After clipping and plugging the points we were able to complete the move. Happily, by 10.26, our S&T colleagues managed to rectify the fault – with the aid of a large spanner!

Shortly after, it was reported that Peter Blake, guard on the four-wheeled set, had suffered a fall in Train Story while preparing his train. Fortunately, he sustained only minor injuries but, as a precaution, I upgraded recently qualified Geoff Hammersley-Norton from guard assist.

Later in the day, at around 15.00, I popped into the refreshment rooms to request what was only my second cup of tea of the day. As I walked inside, the glass door of the pie warmer shattered, just as it was being moved by Stuart Angus. Fortunately, there were no casualties. It was with some trepidation that I stepped into my car to embark upon my journey home that evening!

Finally, a structural re-organisation sees the former locomotive operating department now sitting within the operating department. I know that I will be greatly assisted by the four locomotive footplate inspectors, Alan Brindley, Len Pullinger, Steve Smart and Andrew Summers, in matters such as rostering and maintaining competency records. From an administrative perspective, Sandie Jones will assist in issuing the department’s safety critical medical reminders.

In addition to Peter Blake’s qualification as a guard on Thursday 23 April, congratulations are offered to Geoff Hammersley-Norton who also passed out as a guard on Monday 25 May, to Nick Boycott who qualified as a duty manager on 26 May and to Bob Comer who became a foreman on 27 May. On 15 June Daniel Fisk and John Paton were both passed out as pointsmen. These promotions will hopefully solve some of the staff shortages experienced in recent months.

Traffic figures grid appears below. Operating days refer only to those on which published services operated. Passenger journeys on trains not shown in our public timetable (such as the AGM day and charters) are excluded.