“Since moving to the Island I’d set myself the challenge of cycling to every open or closed station on the island in one day. With 36 stations to visit, I’d planned a 73 mile route, following the cycle paths along the disused lines wherever possible.

Starting at the site of Freshwater station, the first stretch headed along the railway, now a cycle path to Yarmouth; a very pleasant start beside the Yar Estuary, though the gravel was rough on the narrow wheels of my road bike. Yarmouth station has survived and been extended to create a very attractive restaurant. Beyond Yarmouth the line to Newport has largely disappeared into the landscape, so a lot of meandering along country lanes was necessary to visit the station sites.

Despite closing in 1953, a number of stations on the line survive, with Ningwood and the secluded Watchingwell now private homes. After a long downhill into Carisbrooke, I had to walk up the footpath to get a photograph as close as I could to the site of the station, now part of the school grounds.

The line from Newport to Cowes was the first railway built on the Island, dating from 1862. The site of Newport station now lies beneath the town’s bypass and the adjacent retail park, but a blue plaque, erected for the IWSRs 40th anniversary, records the site of this once important junction.

The line is now a very popular cycle path, with views of the River Medina for most of the journey. With the wind pushing me along it took just 20 minutes to reach Cowes. There’s not much left of the original stations, however at Mill Hill it’s possible to find the remains of the platform and the adjacent tunnel mouth.

After crossing the Medina on the floating bridge there’s a steady hill out of East Cowes. I re-joined the railway at Whippingham station; one of the structures that dates from the opening of the line, and now another private home. From here its just a few minutes’ along the cycle path to Wootton station. The old station lies hidden at the bottom of the buried cutting, but across the road is the new station, built by IWSR volunteers in the early 1980s.

Next is Havenstreet where a brief stop in my office enabled me to re-fill my water bottle, before continuing to Ashey. By train this is just 1½ miles, but by bike this involves twice the distance and a climb to Upton Cross. The effort was worth it as Ashey station was basking in sunshine, and looking very smart following the attention of the IWSR team. With no public access, the station at Smallbrook Junction, was always going to be the missing station on my journey, so I headed north into Ryde.

In Ryde the three stations could be ticked-off in quick succession. With no catamarans running from Ryde Pier Head to Portsmouth due to the Coronavirus shut-down, the station was eerily quiet, with, unsurprisingly, no passengers in sight. Having raced the train back down the pier to the Esplanade I headed east for the 5 mile ride to Bembridge. By now the south-easterly wind was freshening so this turned out to be one of the toughest sections of the day.

12. WHIPPINGHAM: Well preserved as a private house
13. WOOTTON: Nothing to see of the original station on the other side of the road. Here’s the new Wootton station used by the IWSR
14. HAVENSTREET: The best station obviously!
15. ASHEY: A very peaceful spot… just needs a train!
16. RYDE ST JOHN’S ROAD: Complete with original Isle of Wight Railway canopies
17. RYDE PIER HEAD: With no ferries running due the Coronavirus shut-down, the Pier Head was eerily quiet
18. RYDE ESPLANADE: 2 minutes’ ride later at the other end of the pier

My wife and daughter were waiting at Bembridge, so I enjoyed the first proper stop of the day at the café opposite the site of the old station. Now relieved to have the wind behind me again I made quick progress back along the side of the harbour to St Helens station, then along the old line to Brading. With its original buildings and signal box, Brading retains much of its original character. At the start of 2021 the station will undergo a significant change with the installation of a passing loop and the re-opening of the down platform.

19. BEMBRIDGE: Now modern housing
20. ST HELENS: Another attractive house with many original features
21. BRADING: Home to Brading heritage centre. The station is soon to change with the installation of a passing loop

My ’round the island’ tour required a detour inland to tick off these three stations on the Sandown to Newport line. Fortunately this section of line is now well-surfaced level cycle track that follows the picturesque Yar Valley. At Alverstone the owners have restored the station building to its 1930s Southern Railway splendour, and the crossing gates complete a picturesque railway scene. Nothing remains of the wooden station at Newchurch, but at Horringford the station-masters house is now another private residence. From here  I retraced my outward route to Sandown, with ominous black clouds starting to loom overhead.

22 ALVERSTONE: A well preserved building that proudly displays its railway heritage
23. NEWCHURCH: with the cycle path continuing towards Horringford
24. HORRINGFORD: Yet another private house

I rejoined the Island Line at Sandown – the station here has seen better days, as had the 80-year old class 483 which arrived at the same time. Now on borrowed time, they are finally due to be taken out of service in eary 2021. Lake station is basic and looked very tired, then it was on to the current end of the line at Shanklin where a completely empty train was waiting prior to its return journey to the Pier Head. Having refueled at the supermarket near the station, I peddled on up Apse Bank heading for Wroxall.

Now part of the Red Squirrel Trail, this section of line is now another popular cycle path. The 1 in 70 gradient was taken at a good pace, and in no time I was at Wroxall where the station hotel still stands. From here the real climb starts up the road to Ventnor … if only the old tunnel could be converted into another cycle route! The iconic station at Ventnor is now demolished, but the ampitheatre of cliffs and old tunnel mouth, makes the site instantly recognisable.

25. SANDOWN: more original IWR canopies survive
26. LAKE: Just a wooden platform and small shelter
28. SHANKLIN: With a class 483 about to depart for Ryde
28. WROXALL: The Station Hotel still stands, with the road cutting across the site of the platforms
29. VENTNOR: With the tunnel mouth between the scaffolding and the modern building
29. VENTNOR: Looking the opposite way towards the buffer stops.

Ventnor West Branch, and on to Newport

Ventnor is definitely not a town designed for railways or cyclists! The town’s two stations were both inconveniently situated, and the ride between them tested both my tired legs and brakes. Ventnor West station now sits amidst a peaceful row of bungalows and is currently on the market as an attractive home. The stations on this line were comparitively large, and despite being an early closure in 1952, all survive intact.

My ride continued along the Undercliff to St Lawrence. By now the earlier showers had cleared and it was possible to admire the coastal panorama which would once have greeted passengers emerging from the High Hat Tunnel. The steep road up St Lawrence Shute proved to be too great a challenge – for the first time in the day I was forced out of my saddle to push my bike up the hill.

With this obstacle conquered it was downhill pretty much all the way to Newport. Whitwell station is probably the best-preserved of the disused stations – now a very nice-looking B&B. The station building at Godshill is also very recognisable. With the wind and gradient in my favour it didn’t take long to reach Merstone where the island platform was enjoying some early-evening sunshine. With the end in sight I peddled on via Blackwater, to my final station at Shide. Here the landscape has changed so much that it is hard to imagine there ever being a station here at all. This seemed to an unsatisfactory end to the journey, so I rode the extra mile into Newport to finish beneath the blue plaque at the old station site.

20. VENTNOR WEST: Now split into two houses with the trackbed now a residential street
30. ST LAWRENCE: A tight station site in the Undercliff, with a stiff hill to follow
32. WHITWELL: Now a delightful B&B
33. GODSHILL: Another surviving station on this line
34. MERSTONE: Easily identifiable, and now a popular stop on the Newport to Sandown cycle path
35. BLACKWATER: WIth the station house still guarding the road crossing
36. SHIDE: The final station – now changed completely 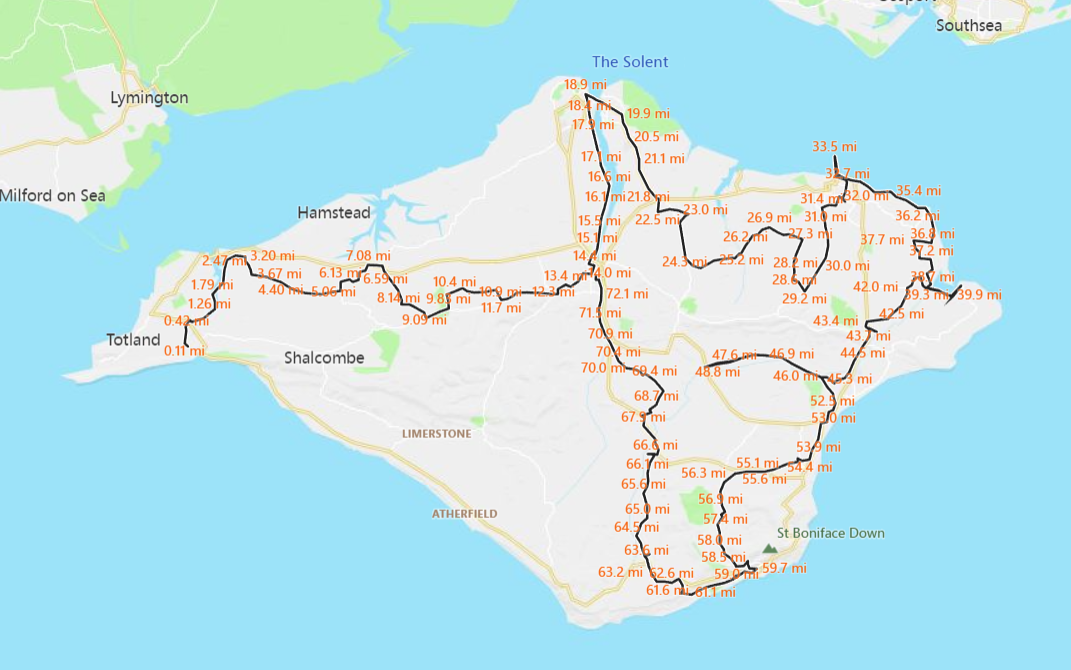