At a number of locations around the Isle of Wight the grounded bodies of historic railway carriages can still be seen. Some sit in fields serving as farm outbuildings, others have been incorporated into bungalows and holiday homes. When they were no longer required for railway service these carriages were removed from their underframes and sold on to new owners to begin their new lives.

An example of the challenge that faces our carriage restoration team. This is part of the grounded body of LCDR 7-Compartment Third 2418. The body was cut in half when it was sold out of service; the railway now owns both halves and they will eventually be reunited on a new underframe.
Old carriages awaiting renovation.

One of 24 carriages built by the Oldbury Carriage and Wagon Company Ltd in 1864 for the opening of the Isle of Wight Railway from Ryde to Shanklin. It has three equal size compartments which had bench seats against each partition. It became a workshop next to a bungalow at Cranmore and is thought to have arrived soon after the house was built in 1913. After donation to the Wight Locomotive Society it traveled to Havenstreet in September 1980. This carriage is now being restored in our carriage & wagon workshop.

Although not positively identified this carriage is believed to be one of the eight of this type ordered for the opening of the Isle of Wight Railway in 1864, built by the Oldbury Carriage and Wagon Company. After withdrawal from service it was grounded as a chalet at Thorness Bay around the start of the First World War and, over the years, had to be moved back from the cliff edge because of erosion. It arrived at Havenstreet in 1991.

It has proved impossible so far to positively identify this vehicle. Although bearing all the hallmarks of an Oldbury-built vehicle it is unlike anything delivered new to the Isle of Wight Railway. For many years after its discovery at St Helens no clue as to its origin was known until it was identified in the background of a photograph taken at Bembrige. It is known that carriage No.35 was altered from a Second to a Composite at Ryde in 1883 for service on the Brading Harbour Railway and it is surmised that this body is of that vehicle. This carriage was generously donated to the Steam Railway in 1993.

This is one of a pair of Composite First/Third carriages ordered from the Oldbury Carriage and Wagon Company, in 1882. It received Southern Railway livery and was renumbered 6335 in October 1924, remaining in service until March 1927. The body was discovered built into a bungalow on Hayling Island and in 1975 was moved to Havenstreet to await restoration.

This carriage was one of four Seconds delivered in 1882 along with two Composites which had a higher roof profile than the earlier Isle of Wight Railway stock. It survived to come under the ownership of the Southern Railway, receiving the number 2421 in 1924. Final withdrawal followed in 1927 when it migrated to Hayling Island, becoming part of a bungalow. After donation to the Steam Railway it was initially moved to a site at the Portsmouth Polytechnic and then in March 1978 it arrived back on the Isle of Wight.

This short bogie carriage was one of a batch of five built by the London, Chatham and Dover Railway in 1895, three of which came to the Isle of Wight. The coach was stored for most of the war years, finally being withdrawn from service in 1948. When scrapped the body was cut in two, both halves being grounded at Dodnor Farm, Newport. Both sections are now at Havenstreet, awaiting their turn for restoration.

In 1898 Brown, Marshall of Birmingham built six Brake Thirds for the London, Chatham and Dover Railway, five of which were destined for service on the Isle of Wight. The coach was transferred to the Island in 1933. During its Island service its wood paneled exterior was covered over with steel sheet although the lined olive livery was applied to simulate the old style. After withdrawal from service in 1948 it was moved to Ash Hill Farm at Atherfield where it was used as a farm store and animal shelter. 4115 was the first carriage body to be rescued by the Wight Locomotive Society, being moved to Havenstreet in 1975. We expect to start a lengthy restoration project in 2020.

When withdrawn in 1948 and 1949 the bodies of many of the London, Chatham and Dover Railway bogie carriages were offered for sale. Besides the two Brake Thirds, one of which is already at Havenstreet (see 4115), all other known remaining bodies have been of “halves” of Thirds. The two portions of 2418 have been saved and additionally several parts of other bodies obtained. Most have not been in good enough condition to warrant retaining intact and have been dismantled to provide a source of spare parts, although two unidentified portions, consisting of two and three compartments, are retained as potential restoration project.

Built by Brown Marshall of Birmingham, one of six ordered, and delivered to the LCDR on 28th February 1898 as No 1189. The Southern Railway renumbered it 3251 in 1924, and again to 4116 in 1933 at Eastleigh after it had been selected for further service on the Isle of Wight.

It was transferred to the Island on 23rd June 1933 as part of 4-Set No 496. During its time on the Island the wooden panelling was completed replaced with galvanised steel sheet, painted to simulate panels. Withdrawn on 8th May 1948, the body was bought by Mr Chiverton and delivered to Fairfields Farm in the summer of 1948 and transferred to Havenstreet in November 2001. 4116 is a sister vehicle to 4115, already in the railway’s ownership. These are the only two complete examples of LCDR bogie coaches known, others on the Island having been cut in half when sold off after withdrawal, and therefore of historical significance.

Built at Longhedge Works during the third quarter of 1898 as a 6-wheel, 5-compartment Third and allocated number 232 in the Third Class series, it was renumbered 666 before entering service. The SECR renumbered it 3186 on 17 July 1906. In 1914 it was rebuilt as a 3-compartment Brake Third without renumbering, being further modified in 1920 by having the centre pair of wheels removed. Chosen for service on the Isle of Wight it was rebuilt again, this time to become a 4-compartment Brake Third and renumbered 4134. It was shipped to the Island in early May 1927 but only lasted six years, being withdrawn on 19 August 1933. The carriage body was sold and then grounded at Cliff Farm, Gurnard, where it gained the name ‘Serena’. 4134 was donated to the IWSR by its owner, Mr Downer, and moved to Havenstreet during November 2011.

Built c.1880 for the Manchester South Junction & Altrincham Railway, later Manchester Sheffield & Lincolnshire Railway and then part of the Great Central Railway. Built as a 4-compartment Second Class vehicle, it was one of seven purchased by the Freshwater Yarmouth & Newport Railway and transferred to the Island in June 1913. For the FYN it was retrimmed to provide two First class and two Third class compartments. Livery remained GCR varnished teak with the company initials altered to FYN. On 30 April 1924 it became SR No.6359 and was withdrawn on 31 December 1930. The body was sold off and, with a sister vehicle, was grounded in 1931 at Wootton where it first became a chalet and later a yachtsman’s store.

This was part of the same batch as 6378 and was also selected for use on the Isle of Wight. It was transferred in 1930 to be part of set 503. It’s withdrawal took place in 1936 and the body was also sold. It was sold to the grandparents of the family who donated it to the IOWSR. It was originally sited on the west side of Thorness Bay, where the present holiday centre is. In approx 1950 it and several others were moved to the east side of Thorness Bay

Now at the Isle of Wight Steam Railway we have restored the coach as a holiday chalet; illustrating its previous life. Today it forms a fascinating exhibit outside our Train Story Discovery Centre. At present there are no plans to restore it to passenger use. 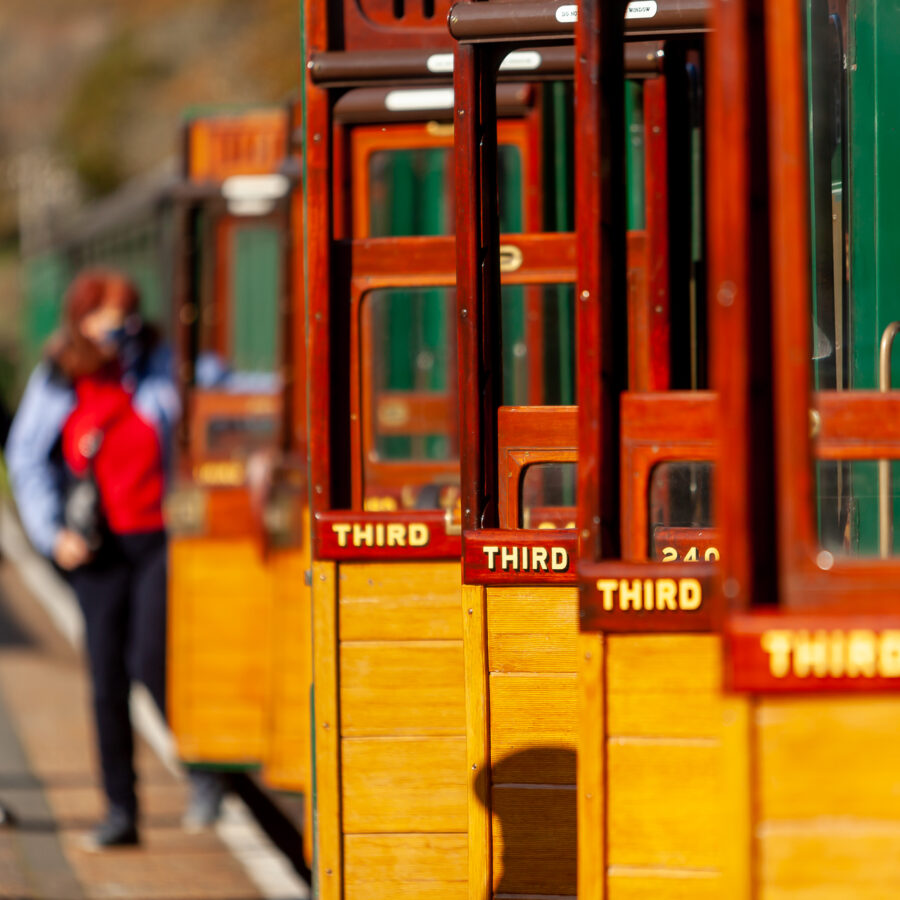 Travel in style aboard our rake of bogie coaches