For over 100 years, from 1864 until its closure in 1969, a tramway ran the length of Ryde Pier. For tens of thousands of holidaymakers, a ride on this tram was their first experience of the Isle of Wight. In 1969 one of the tramcars, Car No.2, was acquired for preservation. Our Ryde Pier Tram Restoration Project is bringing back to life this iconic symbol of the Island’s once proud and extensive transport system.

The trams on the pier

On 29th August 1864 The Ryde Pier Company opened a standard gauge horseworked tramway along the length of the ½ mile pier. The Pier Company subsequently experimented with steam tram engines and steam tram cars, and, in 1886, they ultimately became pioneers in the use of electric traction. In 1927 the Siemens electric power system was abandoned in favour of petrol-engined rail-cars. 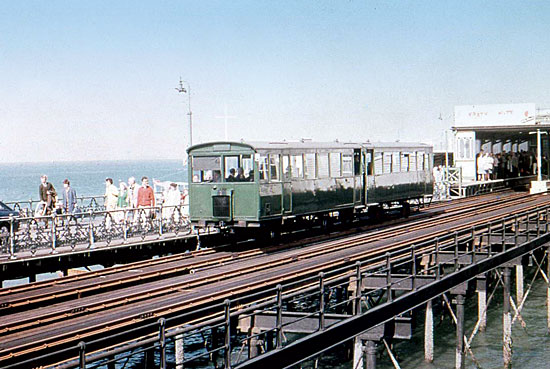 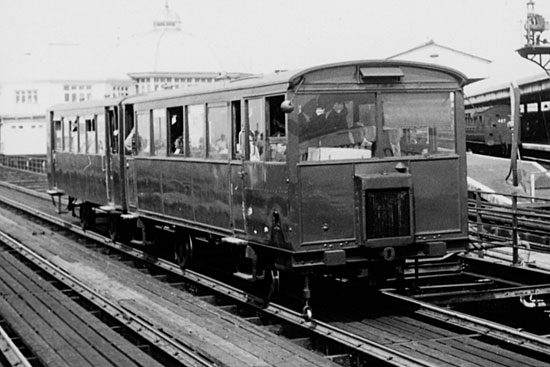 Built by the Drewry Car Co for the Southern Railway, these tramcars were shipped to the Island before being driven to Ryde Esplanade on the mainline railway where they were jacked over the platforms in a special traversing cradle onto the tramway pier. They were somewhat quirky vehicles. Because they ran on their own tracks, there was never any need or attempt to make them compatible with conventional rolling stock. As the journey only lasted a few minutes, capacity was always considered more important than comfort. They had wooden slatted seats along each side with hanging straps for standing passengers. Each tram set had a nominal capacity of around 90 including standees but this was regularly exceeded. The driving arrangements would certainly have raised a few eyebrows among today’s health and safety fraternity as the trams could only be driven from one end and were reversed up the pier with the aid of a unique countdown marker device in the cab approaching the Pier Head but otherwise nothing more sophisticated than a rear-view mirror! As may be imagined, collisions with the stop blocks were not unknown. The petrol engines were replaced by diesel in 1958/9 and in 1968 an inspection of the tramway pier and rolling stock resulted in the system being condemned, with closure following on 26th January 1969.

At this point, Car No.2 was purchased by the ‘Island Vintage Transport Group’. It remained on the pier for some months until transported by road to Newport Station, where the Wight Locomotive Society – the founding organisation of the Isle of Wight Steam Railway – was then based. In preparation for transportation the bodywork was removed in sections and covered storage found. Later it needed to be removed but was then sadly left in the open to decay. Parts such as doors, windows and fittings were removed and the remainder scrapped. This left the chassis, engine and running gear complete. 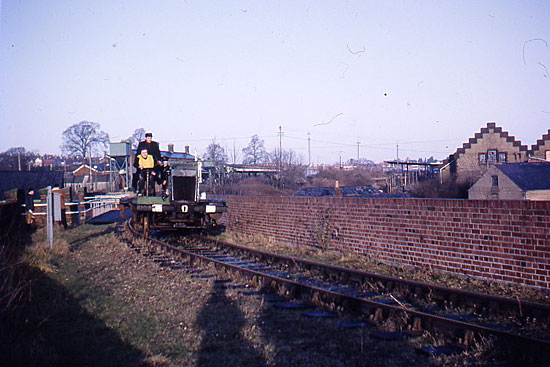 For a year or so, the powered chassis proved useful for running materials around Newport Station. On 24th January 1971 it played an invaluable role when the Wight Locomotive Society’s rolling stock and equipment was moved by rail from Newport to Havenstreet to establish the Isle of Wight Steam Railway. The tramcar remained in service for about a year in use as a ‘runaround’ but as the Steam Railway quite understandably focused on the priorities of restoring its locomotives and passenger stock the tram, needing serious attention to the transmission and engine, was shunted out of use and effectively abandoned.

However, there were always those who were determined that it would be restored, and in 2011 a small group, including some of those responsible for its original preservation, set out a plan for its reconstruction. This was accepted by the Railway’s Board the following year and an appeal was launched.

It was obvious from the start of the project that important decisions had to be taken as to how the Tram would be restored. For reasons mentioned above it was clear that, given current regulations, an exact historical restoration would mean that it would no longer be able to carry the general public. It would probably also have struggled with the quite severe gradients on the Steam Railway. It was therefore decided to incorporate modifications necessary to allow the Tram to run at line speed on the railway and to carry fare-paying passengers. These include a more powerful engine, a driving position in the trailer car and a slight increase in floor height to meet current platform levels. At the same time, every effort would be made to keep the appearance as close to the original as possible.

Work continued behind the scenes with research and the production of working drawings and recovery of all reusable parts but the project was not without its problems. Initially, it was hoped to restore the Tram at Havenstreet but this subsequently proved unrealistic. A decision was therefore taken to restore it away from the Railway. The first contract, for a new chassis for both Car No.2 and the replica trailer, was placed in mid-2016. This was designed by by Graham Morris Engineering and constructed by A.J.Lowther & Sons Ltd. Good news followed when Perkins Engines kindly donated a new 404D diesel engine for the project.

A further contract has since been placed with Alan Keef of Ross-on-Wye who are currently assembling the running chassis for Car No 2. Unfortunately, costs had risen considerably since the launch of the project so a decision was taken to complete the rebuilding of Car No 2, fitting it out to operate as a single railcar, before commencing work on the reproduction trailer car which, unlike the original, will incorporate a driving console and disabled access.

This shows the Trailer underframe. Little or no more work is anticipated on this until after the completion of the Tram itself. Photo: Alan Keef Ltd
Encouraging progress on the Tram itself in April 2017. This shows trial fitting of axlebox and axles, engine, transmission and drop gearbox. Original parts reused include axleboxes, hornguides, spring hangers, engine subframe, brake column, various parts of the brake rigging and front coupling (awaiting adjustment). Photo: Alan Keef Ltd

Work took a major step forward in summer 2018 with the fitting of the new engine, air-braking system and long awaited springs. At the end of June the chassis came to life and wheels turned under its own power for the first time since 1972, albeit on a set of rollers! This was followed by a period of testing all the systems, which proved to be satisfactory. The chassis then moved to Alan Keef’s bodyshop, where work on rebuilding the body began.

Seen in its new temporary home, the tram awaits the start of work on the body.
(Photo: Alan Keef Ltd)

By January 2019 work on the Tram’s body was proceeding well at Alan Keef’s. Construction of the floor framing was well advanced, as can be seen in the photographs.

Much work has been put into the framing to make it more suitable for the rigours of railway operation and thus the original specifications have received considerable upgrades. However, these changes are being carried out in a way so as not to detract from the original design; the additional bracing and framing is carefully hidden from view to ensure the appearance is as close to the original as possible.

Originally the Tram was driven from one end only. Current railway operating procedures no longer allow this so a driving position has been included in the trailer car when it comes to be built. However, in the short term, the tram itself will have a driving position at both ends. This will all be modified back to its original arrangement once the trailer car is ready and the driving position relocated into it. Great care is being taken to ensure this retro fitting will be simple and without major structural damage.

The floor framing is being constructed on the vehicle. On the underside too, splasher plates were fitted above the wheels to minimise the effect of road-dirt adhesion. Work then turned to the body side and roof framing.

Front view of the chassis and floor framing. The modern radiator will be hidden by a dummy unit based on the original. Bob Huxtable (IWR), left and Patrick Keef discuss detail.
(Photo: Alan Keef Ltd)

The tram returned to the Isle of Wight Steam Railway on 25 June 2021. There will be a period of testing and driver training before we can welcome passengers on board.

How will the tram be used?

No final decisions will be taken until the Railway has had an opportunity to test it on its return but several suggestions have been made. These include demonstration runs on the longest siding at Havenstreet, using it for early or late services on the full line or using it as a second service when there aren’t enough passengers to justify two steam trains, much as other Heritage Railways use DMU’s. In any event, after all the delays, it won’t be long before our visitors will be able to sample this unique mode of transport as, so far as we are aware, the Ryde Pier Tram is the only surviving self-propelled light railcar of the inter-war years. 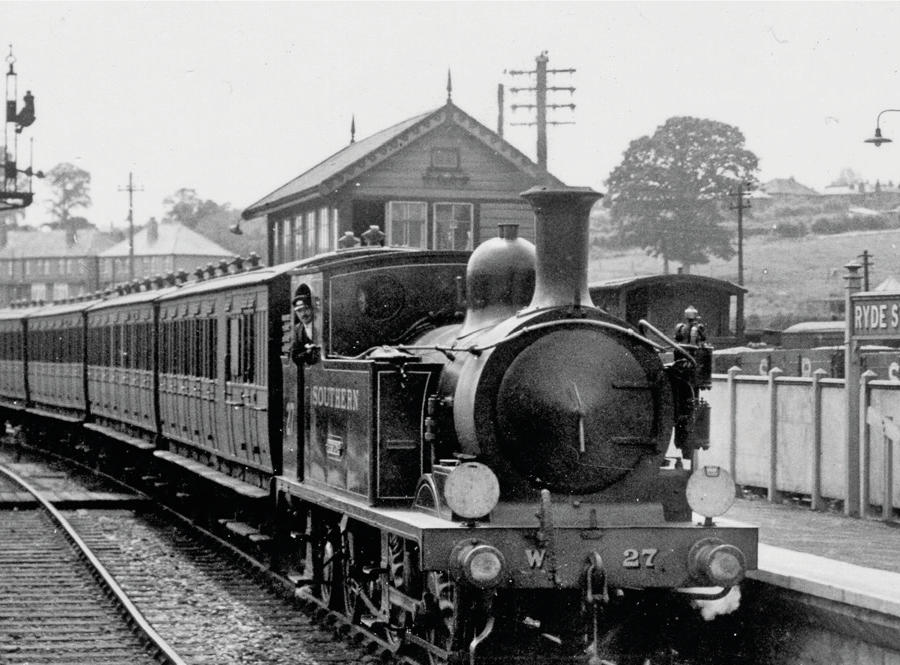